The FireStudio Project is bundled with PreSonus Studio One Artist, our groundbreaking music creation program, and over 4 GB of virtual instruments, plug-ins, loops, and samples to get you started making music immediately. 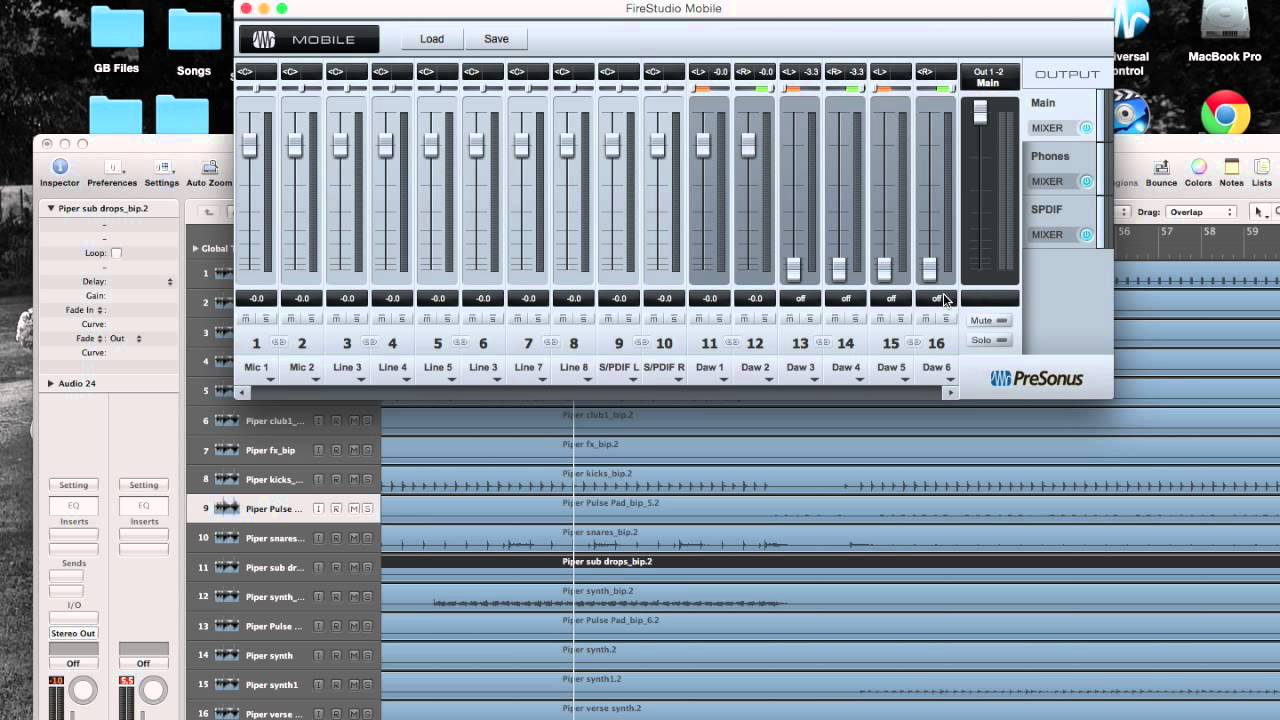 Many other companies offering recording interfaces add the cheapest possible microphone preamplifier as an afterthought to the interface. PreSonus knows that the preamplifier is a key component in the sonic quality of a recording.

The job PreSonus FireStudio Project Universal Control a microphone preamplifier is to boost microphone level signals to line level so that the signal can be converted from analog to digital. This mic to line boost is generally a preamplification of over times the voltage of the original mic level signal.

This preamplification stage is one of the most important stages that the signal will go through before converted to digital, and is why a high performance preamplifier is important to achieving great results. A cheap "off the shelf op-amp" type mic preamp that is found in most interfaces translates into thin, noisy and harsh results. All XMAX preamplifiers are built with the same three elements: PreSonus FireStudio Project Universal Control off the shelf op amp based designs run on power rails of 10V to 18V.

Higher voltage power rails deliver more headroom, deeper lows, smoother highs and an overall fuller sound. It's amazing how much you can really do with a mix when you hear what your audience is hearing.

When you get back to the board you can match everything back up by simply pressing the locate button and moving its faders to match their in SL Remote positions. Everything else is done within the board.

This is where motorized faders would be nice, but I know I couldn't afford even the The fader Locate feature is a nice compromise that keeps this board in the hands of the everyday sound guy or the band on a budget. PreSonus Capture Anyone who's been doing this a while has been asked more than once to record the show, which used to require a split snake, a person and a computer to run the recording software, plus a set of interfaces to be able to get enough tracks into the computer — a royal pain and expense, often beyond the capabilities of weekend warriors without cutting into their workflow and budget. PreSonus came up with the hands-down easiest piece of software for tracking. It does exactly what its name implies. It captures tracks for future mixing and mastering. It works only with SL consoles or a pair of PreSonus FireStudio Project Universal Control It's wickedly simple to operate.

Another cool feature that I use often in the military chapels I deal with is the virtual sound check capability. The band can record in Capture, put down their instruments, come stand by the console and hear what they just played through FOH with Fat Channel settings in place exactly as they are for the actual song.

They hear the mix I've set up by simply arming the FireWire PreSonus FireStudio Project Universal Control on the board and clicking play and can comment on it so I can give them what the song calls for, not just my interpretation of it, or a compromise that sounds better than either. Once we have it where we like it, we can then save the setting in VSL for that song. Not bad for a basic recording program. The main extra that's cool is that you can drop markers and then export the regions between markers as individual multi-track folders. So you can drop a marker at the start and end of each song, then export them all with one command at the end.

These markers also serve as location markers so you can PreSonus FireStudio Project Universal Control get to each song PreSonus FireStudio Project Universal Control great if the band wants to hear how they did and have no patience for waiting while you queue the songs! Studio One Now, I'm not studio oriented. All my mix-down and mastering has been on Sony headphones, and I'm maybe a step above a novice when it comes to recording studios. However, there are things you can do in a live setting with Studio One and a Studio-Live that you can't do with the console alone. A perfect example is the fact that I can't think of a single mixer in this price range that comes with a decent chorus effect.

These include amp modeling, stereo panning, channel strip, expander, flanger, multi-tap and tempo-synchronized delay, tape-delay emulation, limiter, multi-band compressor, 5-band PEQ with low cut and high cut, and room reverb to name just a few. Pro Tools 9, Logic, Sonar, whatever. Studio One Artist is also easy to learn and use because you don't use a lot of menus. Everything is PreSonus FireStudio Project Universal Control, including loading and saving audio and MIDI files, effects, and virtual instruments. It's optimized for modern multi-core processors and operating systems so it's fast and efficient.