The settlement compensates AMD, but not VIA and other microprocessor vendors, and not the customers who have been harmed by insufficient competition and by the "defective" software produced with the Intel compiler. I had a long correspondence with Intel engineers about the issue, where AMD All chipsets CPUID kept denying the problem and I kept providing more evidence. 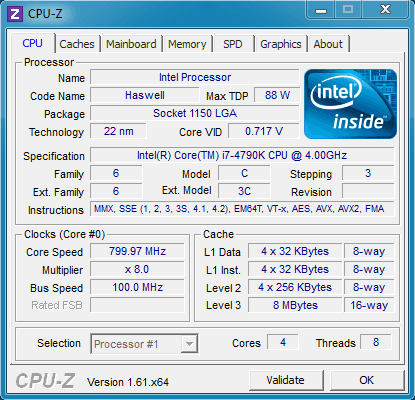 They said that: The CPU dispatch, coupled with optimizations, is designed AMD All chipsets CPUID optimize performance across Intel and AMD processors to give the best results. This is clearly our goal and with one exception we believe we are there now. The one exception is that our 9.

The future I have later found out that others have made similar complaints to Intel and got similarly useless answers link link. It also checks for specific processor models. In fact, it will fail to recognize future Intel processors with a family number different from 6. When I mentioned this to the Intel engineers they replied: You mentioned we AMD All chipsets CPUID not support future Intel processors with non-'6' family designations without a compiler update. Yes, that is correct and intentional. Our compiler produces code which we have high confidence will continue to run in the future. This has the effect of not assuming anything about future Intel or AMD or other processors. You have noted we could be more aggressive. We believe that would not be wise for our customers, who want a level of security that their code built with our compiler will continue to run far into the future.

Your suggested methods, while they may sound reasonable, are not conservative enough for our highly optimizing compiler. Our experience steers us to issue code conservatively, and update the compiler when we have had a chance to verify functionality with new Intel and new AMD processors. That means there is a lag sometime in our production release support for new processors. In other words, they claim that they are optimizing for AMD All chipsets CPUID processor models rather than for specific instruction sets.

If true, this gives Intel an argument for not supporting AMD processors properly. But it also means that all software developers who use an Intel compiler have to recompile their code and distribute new versions to their customers every time a new Intel processor appears on the market. Now, this was three years ago. What happens if I try to run a program compiled with an old version of Intel's compiler on the newest Intel processors? You guessed it: It still runs the optimal AMD All chipsets CPUID path.

But the reason is more difficult to guess: Intel have manipulated the CPUID family numbers on new processors in such a way that they appear as known models to older Intel software. I have described the technical details elsewhere. Perhaps the initial design of Intel's CPU dispatcher was indeed intended to AMD All chipsets CPUID for known processor models only, without regard for future models. If any of my students had made such a solution that was not future-oriented, I would consider it a serious flaw.

Each core also has a KiB level 2 cache. L2 feeds both the the level 1 data and level 1 instruction caches at 32B per cycle 32B can be sent in either direction bidirectional bus each cycle.

Real time measurement of each core's internal frequency, AMD All chipsets CPUID. Test your CPU and GPU stability and cooling at maximum power and This is not every day that we add the support of a new x86 manufacturer in CPU-Z. Today we informations about the core components of a PC: CPU, chipset, memory.