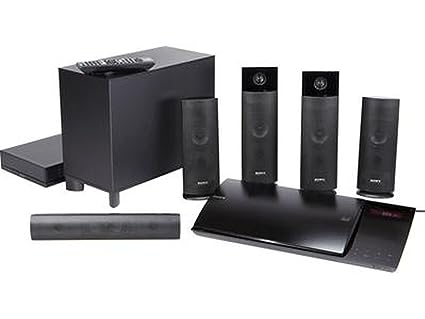 I wish the remote button response was not so delayed and there are certainly some limitations that are to be expected, by at this price point, and for a HTIB, I think it's a real value. After your initial install, and you get the network up and running, just make sure you upgrade the firmware right away. I found mine was pretty dated. It was very easy to set up, maybe minutes.

It has a mic that you put in the center of the room for the initial set up and the system itself will map out the distance of all the speakers and tune itself. It inlcueds an FM tuner, which I really didn't mess with. I had a Sony Blu ray in another room, so I was familiary Sony BDV-HZ970W Home Theatre System the setup of the system to include connecting to the internet. I can also control the volume with the TV remote.

Haven't had the time to see if I can set it up to use the cable remote. The 3D TV just arrived and I need to get glasses. Watching a Blu ray movie on the new 60" TV not a Sony is just amazing.

The Sony BDV-HZ970W Home Theatre System TV just arrived and I need to get glasses. Watching a Blu ray movie on the new 60" TV not a Sony is just amazing. I haven't figured out if you can set it to 3D before the movie begins playing--but that is probably a feature on the other TV and have nothing to do with the player.

The Wifi antenna is a separate USB wireless adapter that is included--but it's wierd that it plugs into a little doc with about a 3' cable and the instructions state to put it as far away as you can from the receiver. I'm guessing that the wireless rear speakers Sony BDV-HZ970W Home Theatre System may cause some interfence.

I followed the instructions and no problems. It doesn't have an iPod doc like the old system. But in order to do that, you have to unplug the Wifi adapter, on the back.